NAPLES, New York - The sign out front Saturday afternoon was a pretty good hint - provided you can read Celtic.
So I was a little unsure I had landed at the right party/family reunion a few hours drive from where I left The Red Writer sitting snugly tucked up next to the Valois cottage where it has been for the last month. After all, it was an Irish family reunion in a place called Naples that sits in the middle of the New York town called Italy.
Really.
To clear up if I had the right spot, I asked a fellow getting out of his truck if I had landed at a Sullivan family soiree.
Before he could answer I noted the bottle of Irish whiskey he was toting to bring in. I knew I had found the right spot, a beautiful hillside home where 40-50 people had already gathered and the party was in full swing
I had been invited to the party by my cousin Monica Sullivan Smith, who, if I have it right, is my late mother Evelyn's second cousin. My maternal grandmother was a Sullivan and thus the connection.
When I was growing up in Brooklyn, we made several forays to the Geneva, NY farm where Monica grew up with her family.
Later when I was in my teens living at Lake Chautauqua a few hours drive away, Monica and her family would pile into their car and drive over to the lake where we had great parties and spent most of the day water skiing or doing some other aquatic activity.
There was no waterskiing at the Naples house Saturday, though the pond and swimming pool looked inviting. A few young Sullivans found their way into the pool.

At one point there was a group photo taken of all the first cousins some of whom dryly noted that there seemed to be fewer people getting in the group shot as the years roll by.
No matter, it was the most cheery, liveliest and friendly party I've been to in a long, long time.
My cousin Monica spends a lot of her time and energy tracing genealogical Sullivan records.
A few years ago she even found the actual ancestral family farm in Ireland, the wellspring for the Sullivan clan in the Geneva, NY area. 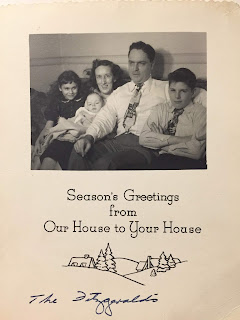 Nearly every time we get together, she has some information, token, or photo connecting my Fitzgerald family to the Sullivans.
Saturday she presented me with a Christmas card from 1948 that my father and mother sent out.
I am the squirt on my mother's lap, flanked by my sister Anne on my right. My late father (Anthony W. Fitzgerald) is the fellow with the then-stylish tie sitting next to my mom. The teenage boy who appears less than pleased to be photographed is my late brother Tony.
These kind of photos & mementos are priceless.
If I had done nothing else in my time here at New York except go to the party, it would have been worth the cross-country journey.
Of course, there have been plenty of other amazing things going on here also since Admiral Sylvia Fox and I arrived in late June. Perhaps most notable was the end of a nearly decade-long battle by citizen activists against a nasty propane gas storage facility. The damnable thing will not be built.
My notebooks are full of stories, story ideas and things to chase down for future columns for the Finger Lakes Times. There's also a sketch outline for another novel that came to me in a dream.
Really.
There's still a lot more Finger Lakes time ahead, followed by a 3,000-plus mile return odyssey across America in August likely to spill over into September. But eventually The Red Writer will make it back home to its home port at the Brickyard Landing condo where Sylvia and I live in Point Richmond, Calif.
When I returned from my sojourn last summer, Sylvia had posted a neatly lettered sign on the front door that said Welcome Home! I saved it. And it hangs on the wall in my office where I see it every time I walk in.
Maybe this year she will post a sign that says Failte baile.
I sure hope so...