Like Willie: 'I can't wait to get on the road again'

VALOIS, NY - The days and nights here in the Finger Lakes since arriving in late June have been amazing. And a little exhausting. How much fun can you pack in?
A lot, it seems. 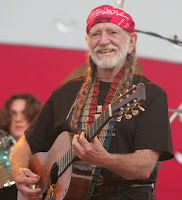 But since the weather turned from steamy humid and blistering heat to overcast and rain, Willie Nelson's refrain from "On The Road Again" is getting stuck in my head.
I found myself - after a 5+mile hike early yesterday morning with amigo Harry Ellison - looking longingly at the road atlas (yes, I have a paper road atlas thank you very much). I started plotting a course across country with a dozen stops.
So far...
The lift-off for that trip is just short of three weeks from today, but I can hear the thrum of the tires already and Willie blasting out of the speakers.
Three weeks can be an eternity or go by in a flash. Based on the weeks since Admiral Sylvia Fox and I arrived in late June, I'll put my bet on the time flashing by. She left three weeks ago to get back to cooler air in San Francisco.
From what she has told me, she found it. Too much of it.
And in about a week, I have a New Hampshire to Lowell, Mass to Woodmere, Long Island road trip planned.
That will be sans the Red Writer trailer, however...I just can't imagine hauling the Red Writer on the Cross-Bronx Expressway or any of the Manhattan Bridges.
Yesterday I went to an artist's reception/exhibit at a shop called Hector Handmade, just a few miles up the road.
I've been to hundreds of such arty soirees over the years but this one was exceptional. Really exceptional.

It was partly because of the interesting art, but also because artist Nicole Costa is a musician, too. She is also a seamstress and probably a dozen other creative things based what people told me.
She and a band called Mother Wort put on a rockin' concert while people oooohed and ahhhhed over her art, most of them sipping wine.
Below is a short sample of their tunes...

Posted by Michael J. Fitzgerald at 9:08 AM