Safely back home in the Republic of California

POINT RICHMOND, Calif. - The Red Writer crossed into the Republic of California from Nevada mid-morning Saturday, eventually landing at a familiar spot in Sacramento: the home of Pam and Steve Lovotti on 46th Street. 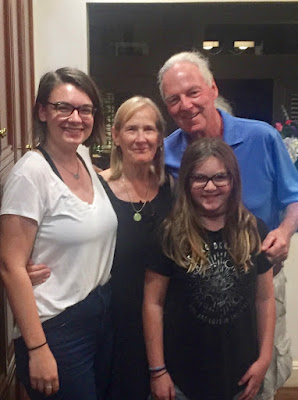 I am happy to report that my electric brake adjustment made the trip down the mountains from Lake Tahoe much less white knuckle compared to zipping down Vail Pass in Colorado.
Adm. Fox drove from the SF Bay Area and pulled in moments after I arrived, giving us our first glimpses of each other since July 11.
We didn't look eight weeks older at all.
The stop, just an hour and half short of home here in San Francisco Bay was to visit with Pam and Steve and also to have a small birthday party for 11-year-old granddaughter Kami Allen. She and her sister Sami came by for dinner and we had a nice party with great food and a stack of birthday presents. 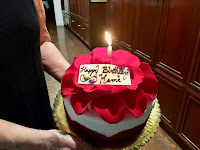 And that night I slept in a full size bed for the first time in weeks. Quite luxurious, I must admit.
The Red Writer is temporarily parked in a secure storage area about a mile from our Brickyard Landing condo. But it's ready to rock and roll anytime we decide to make a
foray camping this fall or head down the coast to Southern California to visit the beaches.
September and October are probably the most pleasant months in the San Francisco Bay Area all years. July and August was damn cold Adm. Fox says - overcast and fog most days.
Well, it was Mark Twain who reportedly said, "The coldest winter I ever spent was a summer in San Francisco."
He probably liked the fall weather though.