Descending the Matterhorn with The Red Writer!

MARION, Ohio - OK! OK! I didn't actually drive The Red Writer down the real Matterhorn Thursday morning.
But damn! It sure felt like it for about 20 minutes. 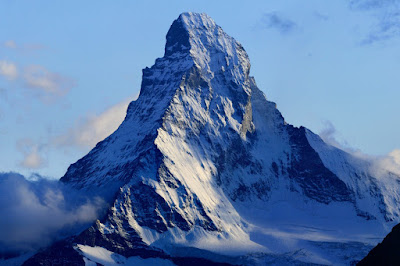 I did drive down  a mountain road that is, way, way waaaaaaay too curvy and steep for a truck pulling a 16-foot trailer - even as nimble a team as the Tundra and The Red Writer.
I was coming down off Signal Mountain, Tenn. after a wonderful three-day visit with my friends Brynne and John and their daughter Sofia. All the emotions, conversations and fun of the visit were rolling through my mind when the GPS piped up and told me to take a left turn.
I took the left, without thinking I was high above the city of Chattanooga and what a cliff-side descent might be like.
Within moments I found myself in the middle of a hairpin curve so sharp, I had to back the trailer up several times to get the rig around the corner. I managed to snap a small emergency brake cable in that process, I discovered later.
From the look on the face of the driver who watched in horror as I backed-and-filled, I was pretty sure I had - as the early Apollo astronauts would say - screwed the pooch. As soon as I got rolling again my heart sank, thinking of maybe 20 or 30 more curves too tight for the rig.
It's a good thing I don't wear a blood pressure monitor because it would have red-lined or possibly exploded into tiny electronic bits.
But some unearned divine intervention must have straightened things out just enough to let me slide around curves with relative ease.
At the bottom when the road flattened out, I briefly considered stopping and kissing the pavement. 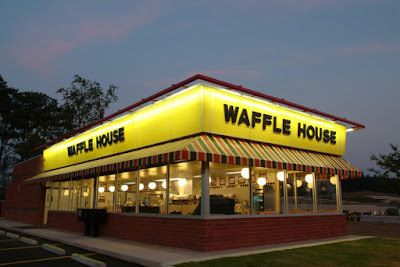 Once on flat ground I smoothly sailed to a Southern icon: a Waffle House restaurant. I met high school amigo Jim Nelson for breakfast. He had briefed a couple of the waitresses about where I was and how I was coming down the infamous W Road. When I walked in, one of the waitresses looked at me like I was total madman.
Not a madman but dumb enough to listen to my GPS when I should have read the road signs.
How was breakfast? Great actually. And catching up with Jim great, too -  even for just the short time it takes to inhale hash brown potatoes, toast and tea.
The rest of the day was standard highway ho-hum, with a few interesting stops and eventually landing at the Interstate RV park in Marion, VA thanks to Admiral Fox's on-the-ground, long-distance navigational support.
The place looks like a housing development because the owner started with a 75+ RV space park that he gradually replaced with mostly small apartments.
It's so peaceful - with just a handful of RV spaces left in the center of the complex - that I decided to catch up on writing several things. Like this blog.
On to Lexington, VA tomorrow and a visit and meal at The Red Hen restaurant. Yes, that Red Hen, the one that declined to serve Sarah Huckabee Sanders and her group last year.
At least I hope to eat there... The place is packed all the time and getting a reservation is like winning the lottery.
But I was clearly lucky driving down the Matterhorn, er, I mean Signal Mountain.
Maybe I'll be lucky again.