Tornadoes on my tail, pygmy goats just up ahead

PARKER'S CROSSROADS, Tennessee - The Red Writer's Tornado Alley adventure in recent days started in Roswell, New Mexico. A longtime local resident warned me about trying to find an RV park in Carlsbad, home of the famous Carlsbad Caverns that I wanted to tour.
"If you want to park in some overcrowded, oil-roustabout man-camp for $100 or $200 a night, go for it," he said. There was also some commentary about pervasive petroleum odors wafting in the air and fights that broke out among camp residents for no real reason.
And so it was I opted to head across New Mexico to the panhandle of Texas, not south.
There I landed in an RV park close to the historic Route 66 town of Shamrock, Texas. I liked the place and the people running the RV park so much I stayed for nearly three days. One of the other RV campers I met owns a farm in Carlsbad, not far from the caverns. He confirmed that Carlsbad has turned into an boisterous oil 'boom town' - in the worst ways. But he offered me a place to park The Red Writer on my next pass through the Southwest.
I just love that kind of serendipity. 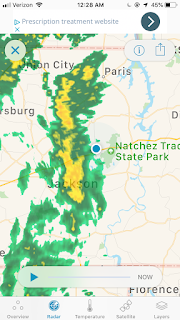 No longer after that, another Shamrock RV neighbor came to chat, nervous about the weather forecast for nasty wind and rain predicted for late the next afternoon. After nine months of California living my weather senses have been dulled to near extinction.
Then he said "tornadoes, thunderstorm and hail the size of golf balls."
That got my attention.
The next morning I left shortly after first light, joining a long caravan of RVs on Interstate 40 all headed east trying to get out of the path of the weather system already sweeping in from the south. I made it all the way to the eastern fringe of Oklahoma where my whole summer's cross-country adventure was nearly derailed by a herd of pygmy goats. And - OK - poor navigation on my part.
If the owner of an RV park tells you "don't trust your GPS, follow my instructions," take their advice.
Seriously.
I didn't and instead took a wrong turn down (Wait for it!) what was once a road but had devolved into a narrow hodgepodge of crater-sized potholes used as a path for goats.
To be fair to the goats, there were a few Shetland-sized ponies wandering about, too, all curious what the hell this truck and red vehicle were doing in their pasture.
It took some serious maneuvering to back The Red Writer up to the highway without:
A. Going into a ditch or
B. Running over any of the curious animals
I really should have turned on my voice recorder to memorialize the moment, though I would have had to bleep out most of my commentary.
An hour after the goat & pony-path excursion I was happily ensconced at the Sallisaw, Oklahoma Lakeside RV park - which, for the record - is probably miles from any body of water. But I was happy and filling up on wine until an RV neighbor came over to tell me the storm we both were fleeing  was moving our way muy rapido predicted to hit eastern Oklahoma (and our RV park) by afternoon the next day.
And so it was I got up early the next morning and tore out again, this time with my radio tuned to weather forecasts to see just how #@$^#&^* far I had to go to get away from the tornadoes already wreaking havoc in Texas and states behind me.
That proved to be Tennessee - central Tennessee in fact where The Red Writer has been parked comfortably for several nights with the storms just a memory. Clear weather and sailing ahead, it seems.
When I arrived here at the Parker's Crossroads RV Park, one of the local denizens opined that "only fools and Irishmen dare cross Tornado Alley in May."
Guilty as charged.
On to Signal Mountain, Tennessee tomorrow!