FLAGSTAFF, Arizona - The launch Friday May 3 from Point Richmond to head out on our adventures in the Southwest was bumpier than expected. That was all my fault, too many details were left until the morning we were to get on the highway.
The 11 a.m. planned leave-taking ended up to be about 12:30 p.m., including having Admiral Fox run back into the condo to grab things left behind - like the U.S. road atlas. Gawd!

But from there it was smoother sailing-driving to the first planned stop, the Mountain Valley RV Park in Tehachapi, a place recommended by amigos Anna and Dave Froker who have spent several nights there in their to-and-fro RV camping adventures.
In the morning the airport runway bordering the campground was busy with tow planes pulling gliders up and releasing them.
But after watching that show for awhile we headed out, landing the second night in Kingman, Arizona at an RV park just off the main drag of the city. It was a quick overnight stop and by 8 a.m. Sunday we were hightailing it for Clarkdale, Arizona to visit longtime friend Veronica at her house in the woods.
It's a beautiful spot which Veronica and her husband have made into a welcoming place to visit. 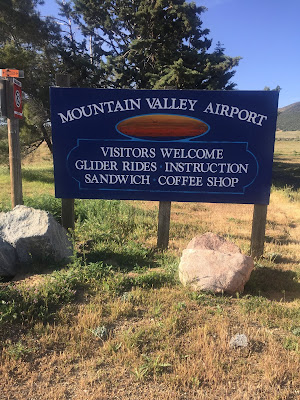 Our Sunday-Monday visit was too short, but we needed to get to Flagstaff to see longtime friends Beth and Mel Tucker. It was 29 years ago that Sylvia and I were married on their deck.
They were kind enough to put us up in their spacious B&B. I don't know if I'll be able to get the Admiral back into The Red Writer after the luxury!
For an anniversary celebration, a few of the guests from that wedding joined Beth and Mel & Sylvia and I for a fabulous dinner and party Tuesday night.
As this is written the morning after, we are getting geared up for a push Thursday on to Santa Fe, New Mexico for more fun with friends before Sylvia flies out Saturday, back to the Bay Area.
And then what for The Red Writer?
It's off to Ruidoso, New Mexico to visit amigo Dave Tomlin, then on to Roswell, New Mexico before tackling the long passage across Texas... I should have said, loooooooooooong passage across Texas.